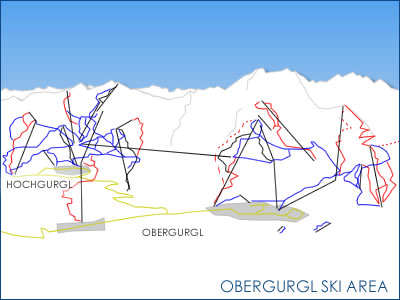 Obergurgl’s ski experience is similar to that of the US ski resort Vail - top-class accommodation in an exclusive resort with flattering groomed runs and a selection of hairier pistes for the more experienced. One major advantage is the general lack of queues on the upgraded lift system – most day-trippers heading up the long and winding Ötz valley decide to stop at the Sölden ski area rather than driving the extra kilometres.

The skiing in Obergurgl is divided between the two areas above the village itself and the bowls around the high-level hamlet of Hochgurgl. Connections between the two ski areas (previously by bus) have been vastly improved by the building of the impressive Top-Express gondola which connects the Festkogl area to the middle of the Hochgurgl runs.

In fact, there has been a fair bit of investment in the infrastructure in Obergurgl in recent years, and the rickety chairlift heading up from Untergurgl to Hochgurgl has been replaced by another speedy two-stage gondola, while the drag-lifts at the other end of the ski area above the David’s Hütte have been replaced by chairlifts.

With the building of the connection between the two areas, it makes sense for day visitors to park at the car park at the entrance to the village and head up the gondola to Hochgurgl – most will take it for both stages as it leads into the main part of the ski runs.

The lifts heading up from the top gondola station rise to one of the highest points in the whole ski area – the spectacular Top Mountain Star hut, where skiers can enjoy an outdoor drink while perched hundreds of metres above Italy. The views are certainly spectacular from there, but the exposed ridge at the top and the steepish black and blue runs down might leave the nervous intermediate skier deciding to head down rather than up for their first run of the day. 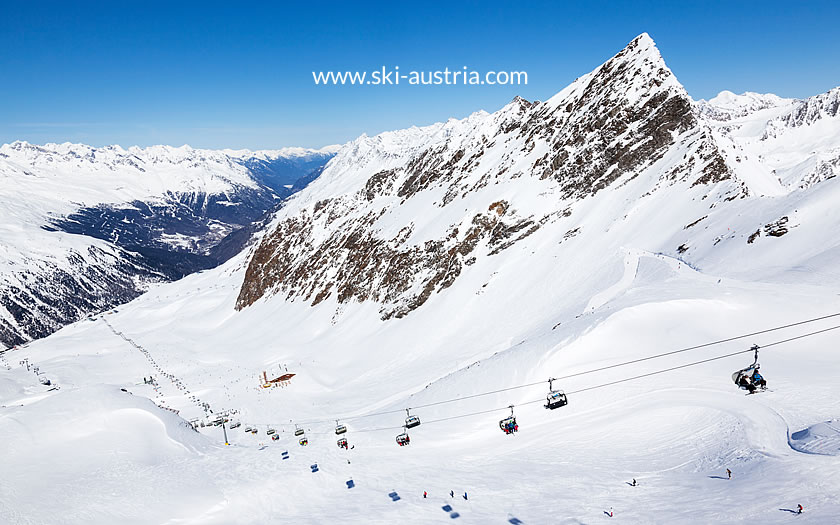 The wide bowls above Hochgurgl

Taking the blue runs down to the complex of lifts below opens up the full expanse of the Hochgurgl bowls. Off to one side are the Krumpwasser and Kirchenkar lifts which offer good skiing beside the piste in fresh snow (check the avalanche warnings) while the Schermerbahn chairlift is another which rises to impressive views and altitude. The red runs from here are good cruising pistes at a decent pitch.

A network of blue runs leads down to the hamlet of Hochgurgl and its sunny terraces where many skiers decide to take a lunch break. The interesting run down to the gondola base station on the road is also worth taking during the day when it is less crowded than when everyone is using it to return to their transport in the late afternoon.

On the other side of the Hochgurgl ski area lie the infamous Vordere Wurmkogel draglifts. Despite being listed on the piste map the short top lift is hardly ever open. The bottom one can be accessed at a mid-station via a blue run or at the bottom via a black run which can be bumpy, icy and have sketchy snow cover. The tow back up is steep but fine for two people, those riding it alone may need subsequent hip replacement, due to the sloping nature of the lift track! 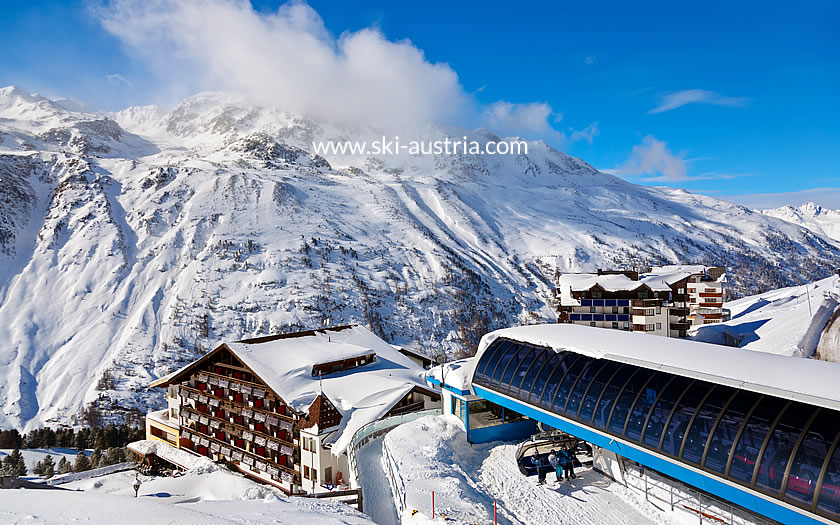 The skiing at Hochgurgl

A short and spectacular ride across the ski touring routes of the Königstal and Ferwalltal on the Top-Express cable car leads one to the Festkogl area above Obergurgl.

The Festkogl has some of the more enjoyable harder runs in the Obergurgl area, with a nice black run and red ski route skirting into the bottom of the Ferwall valley on their way down to the base of the Festkoglbahn gondola. (This would be the route up into the skiing for those staying in accommodation at the entrance to the village or possibly for those in the upper part.)

The runs in the main area are generally red, with the blue routes being crowded with ski school groups and skiers of a less adventurous disposition. The Festkogl area can also be reached by the Roßkar chairlift from behind Obergurgl’s main square.

The remaining part of the ski resort – the Gaisberg - can be reached from the neighbouring chairlift or by traversing the blue connecting run from the Festkogel area. This is the main playground for children’s groups and for early intermediates with a selection of easier and shorter blue and red runs. It is also the area to head for in bad weather as it is almost the only part of the area which is below the treeline.

A few ski routes are available from this area as well – with the bumpy (and rocky) run down under the lift from the Hohe Mut being the favourite. The old and intimidating single chair up the Hohe Mut has been replaced by a new gondola and an additional red run leading down to the top of the Steinmannbahn chairlift.

There is also a fairly lengthy push to the lovely setting of the Schönwieshütte for those looking for a special place for lunch. Other off-piste routes should be treated with caution and it is strongly recommended that a qualified local guide be engaged for any off-piste excursions in this high mountain area.

Looking for the best base for skiing Obergurgl?
Check hotels, guesthouses and apartments rated 'superb' or 'exceptional' by visitors who used hotel reservation website Booking.com. No reservation fees.
Check availability

The live webcam stream below is taken from the Gaisberg area. Another webcam from the Hohe Mut and one from the Hochgurgl area are available by clicking the buttons above the live stream.