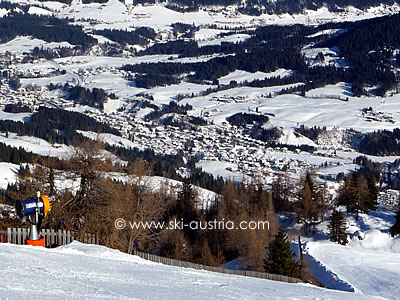 Fieberbrunn likes to advertise itself as the best 'hidden' ski area in Austria. The slogan refers to the fact that it's not easy to see the skiing from the road, but could equally be taken to mean the lack of visibility on the English-speaking market.

Nothing good can remain hidden for too long and it appeared that Fieberbrunn's days were likely to come to an end with the connection into the Saalbach-Hinterglemm ski area.

However, this small town on the local road between St Johann and Saalfelden still treasures its relative calm and its uncrowded ski area while, for the moment, it remains under the radar.

Fieberbrunn is an old mining town from back in the Middle Ages - it is actually thought that some kind of mining took place here before the Romans.

The name actually comes from a mineral spring ('Brunnen') which supposedly cured one of the former rulers of the Tyrol from a bout of fever ('Fieber'). The current name is markedly better than the one used beforehand - Pramau - which could be roughly translated from Old German as 'bramble patch'.

Skiing here started at the beginning of the 20th century when a group of Bavarians climbed one of the hills on skis. A military ski course was also held here at around the same time. In those days, skiing consisted of walking up and then enjoying the downhill part.

It wasn't until 1958 that the local lift company was founded. Steady expansion increased the skiable area and, in 2014, the news broke that the ski area of Fieberbrunn would be connected up to the much larger Saalbach-Hinterglemm-Leogang area.

Enthusiastically greeted from both sides (as well as being two different ski areas, the new connecting lift also crosses the boundary between the Tyrol and Salzburg), the area will boast 68 lifts and 240km of skiable terrain - immediately putting it in the ranks of the biggest Austrian ski areas.

The town of 4000 inhabitants is situated directly on the country road between St Johann in Tyrol and Hochfilzen. It is also one of the relatively few Austrian resorts to boast a rail connection.

More details about travel to Fieberbrunn

Accommodation in Fieberbrunn tends to be located either down in the valley near the main road or in the small hamlet up near the ski area.

More details about hotels in Fieberbrunn

What Fieberbrunn is good for...

What Fieberbrunn is not so good for... 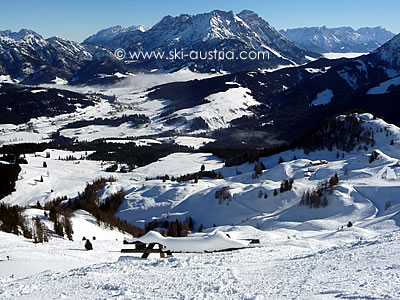