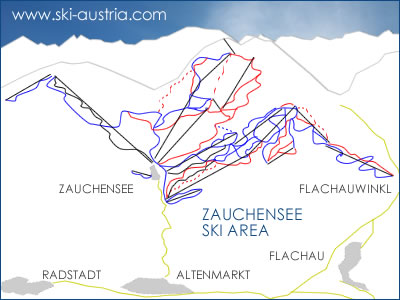 Zauchensee is set in a bowl with skiing on three sides of the village and with a connection through two valleys to the settlements of Flachauwinkl and Kleinarl. Although the maximum altitude is not particularly high, it has a snow-sure reputation and is the venue for one of the regular World Cup ski races.

Skiing is available in most directions from the base stations, with two gondolas and three chairs provided access to some long runs from the ridges above the settlement.

Starting in an easterly direction, a six-person chairlift leads up to the Tauernkar at just under 1900m. There are spectacular views over to the nearby Radstädter Tauern range in the direction of Obertauern and, on the other side, a T-bar of a decent length for those looking for a few blue runs to warm up with.

Heading back down from the Tauernkar, there is a selection of various grades from blue to black to choose from. The black run under the chairlift is sustained but not too tough and has an option to switch onto the blue for anyone that is finding it a bit tough.

Back down in Zauchensee, the Gamskogel to the south is served by a gondola or by a couple of chairlifts. This is the location of the World Cup run and it's possible to take a picture at the base of the World Cup Express lift, which is a very short funicular which takes racers up to the top of the course. It is not open for casual skiers but it is possible to enjoy the views from the top in high season and good weather. 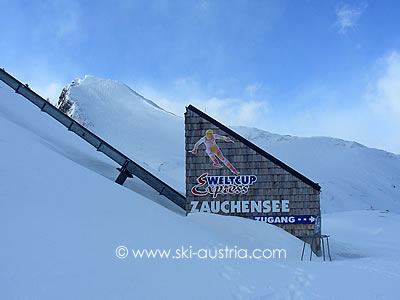 The runs down are the prime examples of what Zauchensee has to offer - long interesting intermediate blue and red runs of varying difficulty levels with the opportunity to break the descents into smaller portions by stopping at the mid stations.

Over to the east from Zauchensee, the smaller and slow Unterbergbahn chairlifts serve an easier network of blue runs underneath the Rosskopf. The Rosskopf gondola, again with a mid-station, offers a tighter red run with a short optional black section near the bottom. A snowboard park is located near the top near the Kogelalm lift. 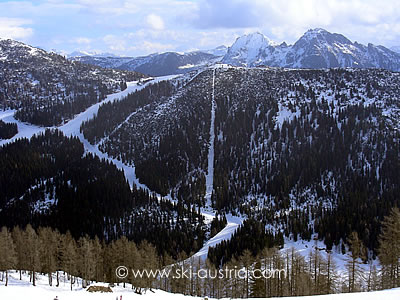 The other side of the Rosskopf provides the connection down to Flachauwinkl and the Tauern motorway, with a couple of blue variations and a tougher red bump route from the top of the lift.

A modern ski centre with a regular shuttle service under the motorway to the Flachauwinkl - Kleinarl skiing is located at the bottom. The Highliner gondola and chairlift transport skiers back up the ridge to the Rosskopf and the possibility of skiing all the way back down to Zauchensee. 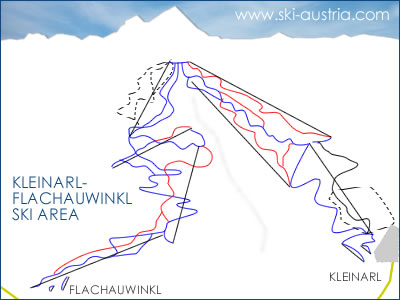 The ski area just across the Tauern motorway is connected by a shuttlebus to the runs coming over from Zauchensee. The ski area links the Flachauwinkl to the small village of Kleinarl on the other side of the mountain.

The Flachauwinkl-Kleinarl area is also linked to Flachau by a gondola lift which leads into the skiing just under the Kogelalm between Flachau and Wagrain.

For a small area, it has an excellent variety of runs, with family-friendly blue runs going top to bottom on both sides and, perhaps unexpectedly in this type of ski area, a good selection of red and black runs with some decent scope for skiing in ungroomed 'free ride' areas. 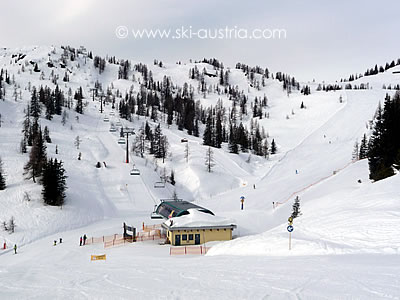 Starting from the small complex at Flachauwinkl, the Sunshine Shuttle heads up over a race course and some easy runs back down to the bottom. From there skiers can take the Family Shuttle up to the bowl near the ridge.

As well as having a number of red and blue runs, this bowl houses the Absolut free ride park with opportunities for ungroomed skiing near the Absolut Shuttle and especially under and to the sides of the aptly-named Powder Shuttle.

The Powder Shuttle is also the link over to the village of Kleinarl, either under the fast long Lumberjack Shuttle or, more directly, to the side of the Bubble Shuttle. At the bottom of this lift, nervous intermediates should choose the blue path through the trees, as all of the runs near the Champion Shuttle are black grade.

Returning to Flachauwinkl is a simple matter of taking the Champion Shuttle and the Bubble Shuttle and then an easy blue all the way to the bottom (with a more direct red for those looking for something a little bit more interesting).

The live webcam stream below is taken at the Weltcuparena base station in Zauchensee. Other webcams in the area are available by clicking on the images at the top of the picture.