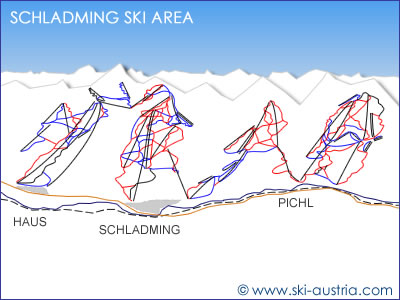 Schladming is one of Austria's resorts that has remained relatively unknown on the English-speaking market. Those who do make the effort will find a ski area split over four hills which may not have the headline altitudes of its northern and western rivals but whose north-facing slopes offer a wealth of top-to-bottom runs and challenges.

The town of Schladming lies at the centre of the four hills that make upthe ski area, with the impressive Planai red and black valley routes sweeping down into the old World Championships arena area at the edge of the town.

The Planai has a wealth of long red and blue runs which can be taken top to bottom. The north-facing location and the fact that many are shaded by trees means that this area tends to have some of the best snow.

From the top of the Planai gondola, the red #1 skirts the eastern edge of the area and can be cut short by using the Planai 6-seater chairlift before the final stretch into the town.

The red #3 is the central run which heads down the centre of the Planai. About halfway down there is an option for the mid-station of the gondola or an ancient three-seater chairlift back up to the start point. Underneath the #3 turns into the famous black run into town - near the bottom it's possible to see the Planai Slope of Fame with its selection of photos and information about previous race winners.

Over on the top western side of the slopes is a secluded area of blue runs and drags also served by the Märchenwiese chairlift.

This ski hill is the highest of the four but also has the highest proportion of wide cruising blue runs, which are a little bit more open and sunny than the Planai.

Arriving at the top of the Sender chairlift, visitors from the Planai and beyond will see a few options heading towards the village of Haus in the valley.

The most extensive area of blue runs is over on the eastern side and served by the two Höfi Express chairlifts. Another easy option is the blue #4 run down to the six-seater Kaibling chairlift.

The runs to the valley floor are, as in the case of the Planai, red or black and have hosted women's World Cup downhill and Super-G races. The main choice for getting back up the mountain is the gondola, which either connects to the previously mentioned lifts or to the sometimes busy Quattralpina chairlift which is the only access to the connection back to the Planai.

The way back over passes two of the region's newest lifts, the Gipfel chair with its short steep black run (and an alternative off the back to the top of the Höfi Express 2 chairlift) and the Alm 6-seater chairlift, which serves what must be one of the most pleasant blue runs in Austria (in terms of scenery and gradient).

Heading down past the bottom of the lift accesses the two chairlifts which head back up to the Planai. Those on the top chair have plenty of time to debate whether they are going to sample an Austrian rarity - a quite extensive field of bumps off to the side of the red #10 run. 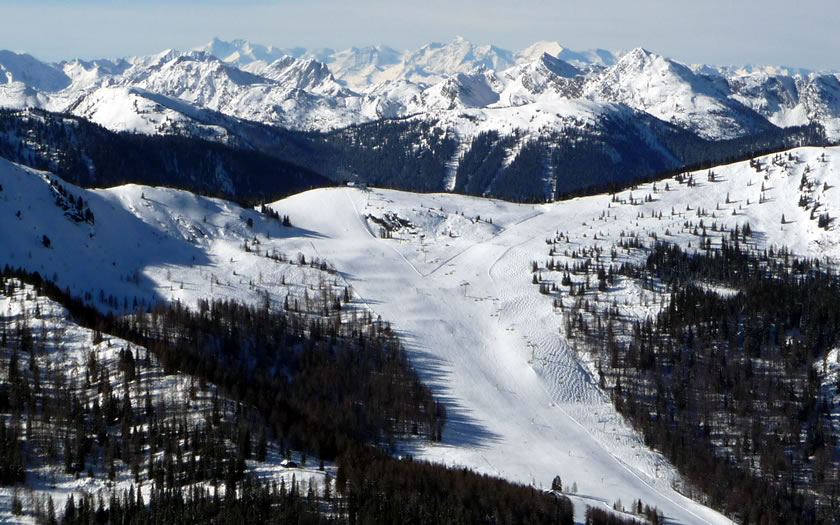 View from the Planai mountain

The other two ski mountains are accessed from the mid-station area on the western side of the Planai. Skiers can head down from the Märchenwiese chairlift and the Lärchkogel chairlift areas heading for the top of the Golden Jet gondola.

Those who want to do a bit more skiing can take the red #6 route down to the mid-station but there is no ski route all the way down to the Planai West bottom station.

The next mountain over is the Hochwurzen and this is accessed from Planai West by two fairly old chairlifts up and over the village of Rohrmoos. There is a wealth of easy intermediate and beginner skiing in this area.

Up above the second Rohrmoos chairlift, the new Hochwurzen gondola accessed the peak area and a network of red runs. Following the gondola back down, there is also the opportunity to head over to the Sun Jet chairlift.

Alternatively, skiers can head over in the direction of Pichl, a hamlet on the main road, following one of the red runds under the Fun Jet chair and then down under the Basic Jet gondola on the red #40.

The last and most westerly of the ski areas is the Reiteralm. This is somewhat similar to the Hochwurzen, albeit with more lifts and probably more testing runs. It is also popular as a training area for World Cup ski racers.

Again the way up the mountain is initially via an old-school chairlift and then the more comfortable Sepp'n Jet. From the top station there is a wide choice of red runs: back down the same way also offers a choice of heading over to the Preunegg Jet gondola as well as back down to the base station or, on the other hand, skiers could head over to the western edge of the ski area via the red #1 run down to the valley and the bottom of the Reiteralm Silver Jet gondola.

Those heading back up and over towards Schladming should remember to leave enough time for the journey back. For those with time and energy in their legs there are a couple of testing blacks off the top of the Gasselhöhe chairlift - black #2 is the one heading back in the direction of Hochwurzen. There are also some short black options on the mainly red run back down to Pichl.

The live webcam stream below is taken from the Reiteralm area - other webcams in the Schladming area are available by clicking the thumbnails.