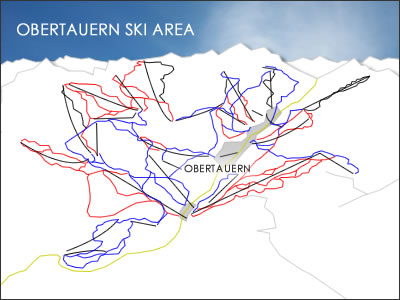 Ski Verdict
Obertauern's skiing is perfect for intermediate skiers who want to get a lot of kilometres under their skis. The altitude keeps the snow conditions good, although high winds and lack of visibility can be a problem if the weather turns bad. The initially-confusing lift system is easy enough to figure out as most of the area is in view at any one time. There are few really difficult runs, although powder skiing is good in appropriate conditions.

Obertauern's skiing is located on both sides of the main road on top of the pass and is readily accessible from different lifts which start at various points in the spread-out settlement. The ski map shows two ski routes – one red and one green – which allow skiers to traverse the two sides of the valley in either direction in what is known as the Tauernrunde (the ski map and the coloured routes are, however, more than a little confusing).

Starting at the Tamsweg end of the village and on the more extensive and easier Seekarspitz side, a tour can start with the Schaidbergbahn chairlift, which provides access to both blue and black runs, as well as being one of the few areas where trees line the runs.

Skiers starting from this end of Obertauern will take the traverse across to the base of the Plattenkarbahn or the Edelweiss chairlift. From the top of either of these it is a flat and easy ski across to the big snow-covered bowl at the back of this side of Obertauern’s ski area.

The access into this area is via the Hundskogelbahn chairlift where a red slope leads down to the group of buildings clustered around the road and, more importantly, the other lifts in this bowl. (Skiers wishing to head for the other side of the bowl should keep to the far side of the piste underneath the Schönalm chairlift so as not to miss the access run to the other side.)

The Seekarspitz chairlift offers long red runs and fabulous views from the top of the lift. It is joined at the top by the Panoramabahn and an easyish black run leads beside this chair down to the collection of lifts at the Untertauern end of Obertauern. Those who want to take advantage of the red runs can always use the Kringsalmbahn chairlift to access the same area.

The Seekareckbahn has a variety of red runs. The one along the edge of the ridge give access to a lovely “hidden” red through the trees which can eventually lead either to the main road and the other side of the valley or to the small group of lifts at one end of the resort and the Snowboard Park. These two lifts, clustered around a couple of guesthouses and a car park and often used for ski school lessons can be reached via the short Fluhbachalm chairlift.

The return to the main resort area is by way of the Kehrkopf lift. Those wanting to return to the other end of the village can shorten their route by taking the Sonnenlift and the Zentralbahn to access the bowl at the back. There are also some nice blue runs in this area.

The route then runs via the Schönalmbahn lift and the Anger chairlift to the other end of the resort. The somewhat quicker alternative would be to take the Zehnerkarbahn gondola on the other side of the valley.

This gives access to a number of lengthy red runs to the base of the gondola or to a blue which heads back to the other end of the village and the base of the Gamsleiten I chairlift.

The first Gamsleiten chairlift has some pleasant, if short, red runs to the base, while the imposing run undeneath the Gamsleiten II chairlift features on many posters and cards around the village.

Essentially a steep bump run, the black run available off the second Gamsleiten chairlift is not particularly difficult or long in itself. However, it is narrow in places and the number of people wanting to test themselves against the run means that it can be crowded and icy in poor snow conditions.

Looking for a top-rated base for your skiing in Obertauern?
Check hotels, guesthouses and apartments rated 'superb' or 'exceptional' by visitors who used hotel reservation website Booking.com. No reservation fees.
Check availability 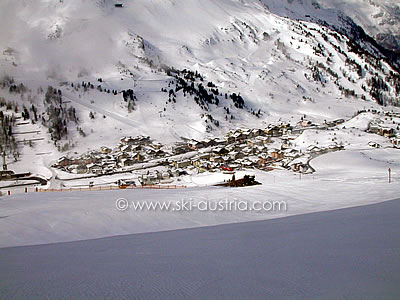 The live webcam stream below is taken from the Gamsleiten area - other Obertauern webcams are available by clicking the middle button above the live stream.