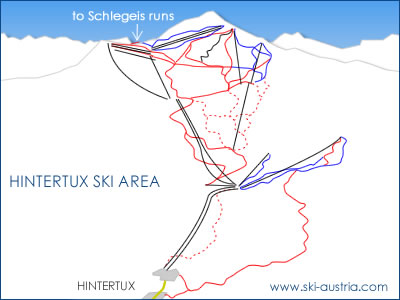 Hintertux is - in our opinion - the premier glacier skiing resort in Austria. The Gletscherwelt Zillertal 3000 stays open year round and offers a range of skiing that few other glaciers can match. Like any glacier ski area, it is small compared to 'normal' resort areas, but has the advantage of being a short bus ride away from the main interlinked skiing between Lanersbach and Mayrhofen, with the area lift pass covering all the Mayrhofen and Hintertux connections.

quick facts about the hintertux glacier

The lifts up onto the Hintertux ski area are located just outside the final village in the Tux valley at a bottom station with underground and open-air car parks.

Transport up the mountain to the initial Sommerbergalm stage is provided by the first of three stages of the large Gletscherbus gondola or via the smaller Sommerberg gondola.

The skiing at Hintertux is split up into three main areas. Access to two of them is via the second stage of the Gletscherbus or the smaller Fernerhaus gondola.

The larger of the two is the area around the Gefrorene Wand and above the Schlegeis glacier on the other side of the ridge.

The third stage of the Gletscherbus gondola takes skiers up to a high point of 3250m (an alternate route to the same location is offered by the Gefrorene Wand bubble and the Gefrorene Wand chairlift) and accesses some short steep red runs which lead to the bottom of two draglifts heading back to the top again.

Skiing on the Hintertux glacier

In the other direction are another two draglifts which take skiers up under the flanks of the Olperer and access the snowboard area known as Betterpark. Taking the far left run at the top of the Gefrorene Wand lifts will lead skiers to the top of the Schlegeis chairlift and the black and red runs on the other side of the ridge with their spectacular views down to the reservoir of the same name far below.

One of the main attractions of the Hintertux glacier for any skier is the ability to string together some long runs and, from the top of the Schlegeis chair, it is possible to ski back down on the Hintertux side well over 1000m in altitude all the way to the bottom of the Sommerberg chair on two interesting red runs.

On the way down skiers will spot some lifts off to the left and these make up the second of the areas on this side. Taking the traverse over to the draglifts will access some simple short blue and red runs alongside the two Kaserer draglifts. Below these lifts is the Lärmstange chairlift and, to either side of the chairlift, a number of red ski routes which are open in good snow conditions.

(It should be noted that ski routes on the Hintertux glacier are not necessarily prepared or controlled, but are free from crevasses. Skiing off-piste and fresh snow away from the ski routes can be extremely dangerous because of the frequency of crevasses in this glaciated area.) 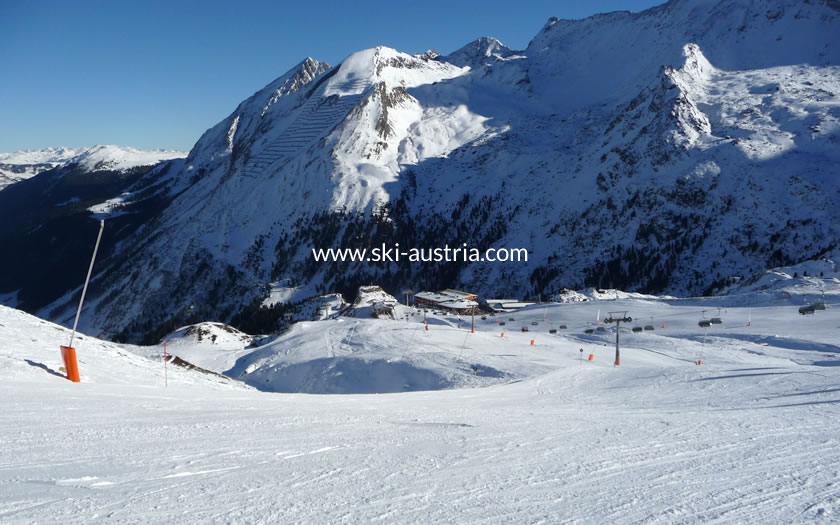 December skiing on the Hintertux glacier

This run, known as the Schwarze Pfanne, is classed as a ski route - with the difference that this route is groomed and has snowmaking facilities to ensure decent cover. The run is one of the most interesting in the Hintertux area and offers a return to the base station or into the village of Hintertux. (There is another ski route from the Sommerbergalm which, when open, also accesses the base station but which is not groomed and has no snowmaking.)

If you are looking for information about skiing and other activities around the Hintertux glacier in summer, please see the article on the Ski-Austria blog: Summer Skiing Plus - Hintertux Glacier

getting to the hintertux glacier

The skiing on the Hintertux glacier is further away than many a skier would think. The ski resort of Mayrhofen is 30 kilometres from the Inn valley and all directions through the Tyrol and, from Mayrhofen and the end of the Ziller valley, the access to the base station of the glacier ski area is a further 20 kilometres.

The live webcam stream below is taken from the Gefrorene Wand area - other Hintertux webcams are available by clicking the buttons above the live stream.