Ski Verdict
Kitzbühel skiing is renowned the world over – whether as the site of the intimidating Hahnenkamm classic ski race, its status as a playground for the rich and famous, or just because of the attractive town and superb skiing behind it.

Recent lift improvements have alleviated bottlenecks in the system and the Kitzbühel skiing experience is much better for it. Truly a resort with something for all levels of skier.

The skiing in Kitzbühel is extensive and stretches from the neighbouring village of Kirchberg all the way out to Pass Thurn with its views into the neighbouring province of Salzburg. A smaller second area on the Kitzbüheler Horn offers more choice for skiers and snowboarders.

The Hahnenkamm gondola remains the only access point from the town into the main ski area above the village and this is usually followed by an often-crowded run down to the collection of chairlifts heading up to the Steinbergkogel or to the Ehrenbachhöhe.

The Steinbergkogel side provides some challenging black runs and some opportunities for off-piste in good conditions. Those who feel it is too early in the day to challenge themselves to that extent will head along the ridge and down towards the Pengelstein area, or, alternatively, take the Ehrenbachhöhe chairlift up to reach the connections to Kirchberg.

The runs down to the bottom of the Fleckalmbahn gondola and the Maierl chairlifts in Kirchberg offer great intermediate cruising as well as a few challenging black and off-piste excursions along the way.

Those heading down into the Spertental in the direction of Aschau will also notice the new Westendorf lift – the Ki-West – on the other side of the valley. This gives access to the neighbouring ski area of Westendorf and from there to the Wilder Kaiser ski region.

It should be noted that this is not covered on the normal Kitzbühel ski pass and the lifts can only be used with the special more expensive Kitzbüheler Alpen ski pass (which also covers the Alpbach, Wildschonau and Schneewinkel areas). A free shuttle-bus runs between the base of the Ki-West gondola and the Pengelstein lifts.

The other major attraction at the Pengelstein – apart from the new restaurant – is the massive 3-S-Bahn gondola which crosses the valley to the ridge above Jochberg on the old Kitzbühel Ski Safari route. Locals mutter none too softly about the rise in the cost of lift passes that the most modern technology of the 3-S-Bahn has necessitated, but there is no denying that the lift is a spectacular improvement to the accessibility of the ski area.

This whole area at the back of Kitzbühel all the way up to Pass Thurn is an intermediate skier’s paradise with a lovely selection of red and blue runs and some spectacular scenery.

From above Jochberg, there is a choice to ski all the way down to the village or further over to another set of lifts – the Bärenbadkogel chairlifts I and II. From here it is possible to ski to the base of the aged Zweitausender chair and into the furthest-flung part of the ski circus, the Resterhöhe.

Again, there is a good selection of red and blue runs, with snow normally in good condition due to the exposure. The far edge of the ski area is reached at the middle station of the Panoramabahn gondola heading up from Hollersbach in the valley near Mittersill at the base of the other side of Pass Thurn.

Returning to the 3-S-Bahn involves simply retracing one’s steps, although it should be noted that one section down to the Trattenbach chairlift does involve a relatively easy black run. At the end of the ride, a swift run down to the Silberstube chairlift and then to the Ehrenbachhöhe chair will leave a long traverse to the top of the Hahnenkamm.

The course of the world-famous Hahnenkamm race on the Streif is often closed off – the race route itself is marked as a ski route on the Hahnenkamm (look for signs for “Streif-Rennstrecke”) but there is also an often crowded “family-route” down a red run to return to the village.

On the other side of Kitzbühel the Kitzbüheler Horn provides a small ski area with a sunny bowl for skiers and for snowboarders. There is nothing particularly challenging here but a new set of runs makes an interesting change for a day. 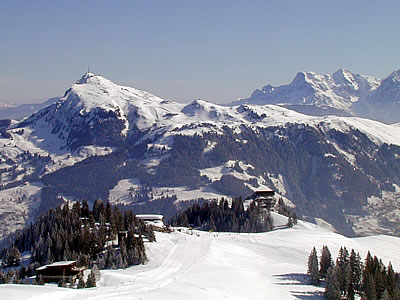 The live webcam stream below is taken from the Hahnenkamm in the centre of the Kitzbühel ski area.

Skirent Michael
Skirent Michael offers ski and snowboard hire, telemark and cross-country equipment and ski servicing from the shop in the Alfons Petzoldweg near the Aquarena and the Hotel Resch.
Website: www.skirent-michael.at