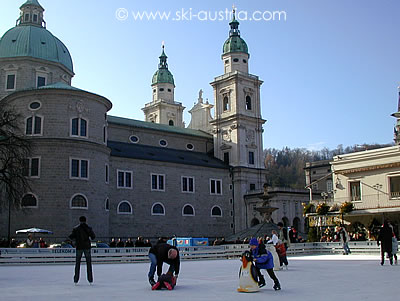 What's the best resort in Austria for a family ski vacation? Where do I find the best powder in the Tyrol? Which resorts are the closest to local airports? Where do the experts ski in Austria? What about ski resorts with facilities for non-skiers?

Plenty of questions - and Ski-Austria.com attempts to answer at least some of them so that you have an unbiased viewpoint on which to base your ski vacation choices.

And if you would like Ski-Austria.com to cover any particular subject, please feel free to contact us at .

Austria is well-known as one of Europe’s finest destination for skiing holidays. The Austrian Alps are not as high as they are in France or Switzerland, but winters tend to be colder and snowfalls are very reliable. However, in the past few years Austria has been increasingly affected by global warming and the resulting bizarre weather phenomena: either wonderful skiing seasons with loads of snow or strangely warm winters with white runs of artificial snow meandering through green slopes.

In any case, if you spend your winter vacation in Austria and the weather is inappropriate for skiing, this is not a reason to despair.

The country’s reliable tourism facilities guarantee plenty of alternatives. Here are some suggestions for Salzburg, Upper Austria and the Salzkammergut.

Looking for the best-rated accommodation in Salzburg?
Check hotels, guesthouses and apartments judged as 'superb' or 'exceptional' by visitors who used hotel reservation website Booking.com. No reservation fees.
Check availability

The city of Salzburg is the capital of a province with the same name. It is famous for Wolfgang Amadeus Mozart, a musical virtually unheard of in Austria (“The Sound of Music”), its summer festival of opera and classical music and its Baroque architecture.

The latter is owed to the independence that Salzburg enjoyed as a state until the Napoleonic Wars. During the 17th century, the rich and powerful Prince Archbishops of Salzburg transformed the medieval city into a Baroque showpiece.

Today, you can roam narrow alleys, walk on the hills that surround the city or enjoy a tour of the mighty fortress. Top attractions beyond the fortress are the Baroque cathedral (Salzburger Dom), the Residenz Palace and the Müllner Bräu, an original Salzburg beer hall.

Salzburg is certainly nicer in the summer, but a rainy winter day is certainly better spent there than on the slopes.

Hallein and the Show Mines

Just south of Salzburg you find the small town of Hallein. The obvious wealth of Salzburg was generated here in the salt mines of Mount Dürrnberg.

Today, mining has stopped and the mines are now open to the general public. They are hugely popular with children and a perfect day-trip when it rains. The mine attractions include an underwater lake, wooden slides and modern displays of different historical techniques to mine salt.

If you are interested in history, go to the Keltenmuseum in Hallein itself. Here you can learn more on the Celtic tribes that started to mine salt in this areas many centuries ago.

If the weather is rainy and miserable, one of the best things you can do is to spend a day in the steaming-hot waters of a thermal spa. There are plenty of “Thermen” or spas all over Austria, but only a few are within convenient reach in Salzburg and the Salzkammergut area.

Across the border to Bavaria, you find the Rupertustherme in Berchtesgaden. And in Upper Austria, you can relax in the hot waters of the Eurotherme in Bad Schallerbach (the biggest spa in Austria), the Therme Geinberg, the Kaisertherme in Bad Ischl in the Salzkammergut or the spa of Bad Hall. All spas are equipped with extensive fitness, beauty farm and sauna facilities.

For those who booked an early skiing vacation before Christmas, the many traditional “Christkindlmarkt” or Christmas markets will make a rewarding day-trip attraction. Most towns in Austria have these markets, which traditionally sell craft, food and mulled wine. Particularly nice ones in the Salzkammergut area are in Mondsee, St. Gilgen and St. Wolfgang.

Note also that throughout the year as long as there is no ice on Lake Wolfgangsee, there are boats cruising between St. Wolfgang and St. Gilgen. Since both towns are among the prettiest in the Salzkammergut area, a cruise that combines the two is both popular and recommended.

This article was written by Benedikt Mandl, who runs the website www.TourMyCountry.com. It provides detailed information on all destinations mentioned above, alongside with lots of advice on Vienna sightseeing, information on Austrian culture and a “behind the scenes” travel guide.